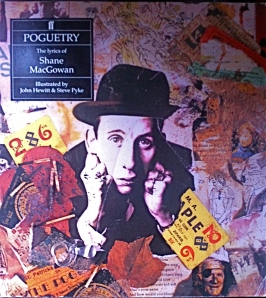 At their height, The Pogues were as vivid an embodiment of the Irish of London as you’re ever likely to see. Their songs bled London and bled Irish — they sang of drunken winter weekenders in Camden and summer days in the old country on the banks of the Shannon with the smell of freshly-cut hay in the air. The band, of course, had their famously raucous side. By 1983, when they were formed, other ex-punks had cleaned up their act and their music and embarked on musical careers but Shane MacGowan and Co weren’t finished the business of the late 70s and continued to get up the noses of most, including the BBC on countless occasions, such as when the band’s Alex Cox-produced video for “A Pair of Brown Eyes” was banned from the airwaves for its insolent depiction of Margaret Thatcher. In 1988, the Beeb banned “Streets of Sorrow/Birmingham Six” for daring to argue that the sextet of the title were framed by British justice. If getting up the nose of the British establishment wasn’t so difficult, there were more natural allies put out by them back home, such as Noel Hill, the squeezebox player with Planxty — one of the group’s idols — who told them to their face during a stormy RTÉ radio forum that they were an “abortion of Irish music.” Even in the band’s afterlife (they only tour these days) they have been a discomfiting presence. “Fairytale of New York”, probably the earthiest song ever to become a Christmas standard was belatedly censored by the Beeb a few years ago for using the word “faggot”. It was a slavish sop to political correctness that ignored both narrative dialogue and the fact that the Pogues, with a gay guitarist and sympathetic ballads about abused rent boys, had been taking a stand against homophobia long before the mainstream media got the memo.

“A Pair of Brown Eyes”

There was a time however when a certain esteemed British institution did court The Pogues and their dentally-challenged front man. In September 1989 Faber & Faber published a large format edition of Shane MacGowan’s lyrics under the title Poguetry (the band had already used this pun for their 1986 EP Poguetry in Motion). It was essentially a handsome but low-end coffee-table book; MacGowan’s lyrics were accompanied by surreal sketches by illustrator John Hewitt and photographs by The Face and NME alumnus Steve Pyke, both of whom joined the band in the studio and on tour throughout 1988. At the time it was a puzzling publication, especially as MacGowan’s lyrics, excellent as they often were, looked a little flat on the page. The sketches and photographs add context and texture but MacGowan’s oeuvre, by that time, was relatively slim, being drawn from The Pogues’ first four albums and assorted b-sides (and even those were not all his work, with other members contributing lyrics, not to mention many traditional songs). You got the sense that Faber, that soberest of British publishing houses – home to Pound, Eliot, Larkin, Heaney and Beckett – was viewing Shane as a future Bob Dylan. If they were, they can hardly be blamed for it, as MacGowan was surely the closest thing to Dylan Ireland has ever produced, with a lyrical versatility and strength of personality approaching that of the Bard of Duluth.

The book is a curiosity, with Pyke and Hewitt ably capturing the essence of The Pogues, a band that straddled tradition and iconoclasm, sartorial decorum and drunken disorder, gregarious sociability and taciturn sensitivity. It also marks the moment where the group turned to the US, of which “Fairytale of New York” was also a product. The band soon realised there was a huge diaspora (and non-diaspora) following Stateside to play to and nowadays, with appearances on countless soundtracks, including, most famously The Wire, The Pogues are arguably more synonymous with Irish America than the London Irish.

Unfortunately there was not to be much more of it. The Pogues and Shane would be together for only one more album, 1990’s Hell’s Ditch. Shane’s drinking, already the stuff of contemporary lore, was making him increasingly unreliable and at times incapable of performing. The end came in September 1991 during a tour of Japan when the rest of the band sacked him. Neither party ever performed as well again (though it can be argued the quality of The Pogues’ own music had begun to fall off after the peak of 1988’s If I Should Fall from Grace with God). The Pogues, now fronted by long-time number two Spider Stacy, released two anaemically directionless albums in the 1990s but continued to successfully tour in the States.

You can hardly blame them for not giving up their livelihood but Waiting for Herb and Pogue Mahone are like the albums The Spencer Davis Group recorded after Stevie Winwood’s departure, missing all the spark of an emblematic lead singer. MacGowan hardly fared any better, spending most of the last two decades as a celebrity drinker, with a couple of albums here and there with his new group The Popes. There were glimpses of the old Shane (and the odd coup, such as getting Johnny Depp to play guitar when The Popes performed “That Woman’s Got Me Drinking” on Top of the Pops) but much of The Popes’ output seemed like an afterthought, similar to the post-cocaine-hell K-Tel moments of ageing rockers.

The Popes with Johnny Depp on Top of the Pops

Poguetry – The Lyrics of Shane MacGowan has been long out of print and copies now fetch up to $80 on Amazon. Hewitt and Pyke have both had successful careers themselves – particularly Pyke, who is now a successor in portraiture to Richard Avedon at The New Yorker. He later collaborated with the Irish-American writer Timothy O’Grady on the brilliantly Sebaldian I Could Read the Sky, which, like The Pogues’ early work was an elegiac account of 20th-century Irish emigration to England. He also contributed to this beautiful visual tour of Poguetry, which allows those not fortunate enough to own the book to have a look at the unique collaboration between three artists who are each wonderful in their own way.

Steve Pyke – Poguetry: The Lyrics of Shane MacGowan from Lauren DeBell on Vimeo.

I first encountered The Pogues around Easter 1986, when Dave Fanning played “London Girl”, off the Poguetry in Motion EP. The first time I saw what they looked like was two months later, when they appeared at Self Aid, that eccentric Irish answer to Live Aid held at the RDS, which some well-intentioned folk, infused with the spirit of Geldof, imagined would turn things around for Ireland’s young jobless. As a ten-year-old, I was very impressed by all the swearing. I wonder what Faber & Faber would have thought…

The Pogues at Self-Aid