Donegal was a county I knew well as a young lad, on account of my mother being from there and most years I’d spend several weeks at my granny’s in Falcarragh, three to four of those in the summer. It always struck me as a county oddly different from what I knew of the rest of Ireland — it was effectively the next county to the north of Sligo but the distance to my granny’s was about as far as it was to Dublin; people there supported Celtic rather than English football teams (indeed, north Donegal was unusual in being a part of rural Ireland where the locals cared far more passionately for soccer than GAA). A popular newspaper was the Scottish Sunday Post, a “good, clean tabloid” as my father used to call it, which was probably unavailable anywhere else in the 26 counties. Despite being the second biggest county on the island, it had no railways — the various lines that served it had all closed by 1957.

It was only later when I crossed the border for the first time that I realised this difference was because Donegal was isolated. It was culturally closer to Northern Ireland — both its Nationalist and Unionist elements — than to the ‘south’ and unlike Monaghan and Cavan, most of the county bordered none of the other three provinces. The partition of Ireland in 1920 had cut Donegal off from its neighbours like a schoolboy who has been kept back a year misses his friends. Donegal was, in a way, the Alaska of the Free State. Most Donegal people, in my childhood at least, rarely thought of the border as anything other than a man-made imposition, viewing it much as the Comanche think of the US-Mexico frontier that cuts through their ancestral lands. And though the overwhelming majority of Tyrconnell folk were enthusiastic for the young republic, Dublin was awfully far away.

I’m not sure if partition had anything to do with a strange industrial subculture that existed in Donegal but there sure was a lot of shit in the shops in Donegal you couldn’t easily get ‘down south’. It probably all started with the Crolly Doll. Made in the village of Crolly since 1939, the dolls were a sort of Hibernian proto-Cabbage Patch Kid, except they had that icy, glazed, all-seeing demeanour of traditional marionettes. They were often clothed in variants of the peasant dress that was rapidly dying out at the time. In a foreshadowing of globalisation, cheaper competition from East Asia killed off the Crolly Doll in the late 1970s and the factory closed but not before my auntie Bríd worked there for a while — something, which, you will understand, represented untold glamour for us as children. A smaller, more ’boutique’ factory was resurrected in the early 90s, and started making more specialised dolls, including ones with porcelain heads (which surely upped the creepy quotient no end), but it appears to have run aground once again. 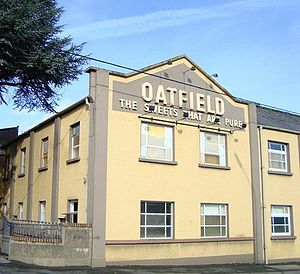 Admittedly, the Crolly Doll was available outside of Donegal, and quite famous internationally it was too, if specialist internet doll forums are anything to go by. The fact though that the doll emanated from what was little more than a hamlet in a far-flung corner of the county was strange enough. And it was far from the only star of light industry Donegal could boast. One of the landmarks we always passed on our journeys north was the Oatfield’s factory in Letterkenny, a building that looked strangely more like a convent school than a confectionery wonderland and the company’s motto – ‘the sweet’s that are pure’ – is rather telling. Oatfield’s made old-school sweets, which only came in those larger, more expensive bags that usually hung behind the counter in a sweet shop, so eating them was synonymous with visiting grown-up relatives. The list of Oatfield’s products reads like a demented Séamus Heaney poem: Butter Mints, Sherbet Fruit, Orange Chocolate, Glucose Barley, Eskimo Mints, Colleen Irish assortment. But the crowning achievement was the flagship sweet — the Emerald. 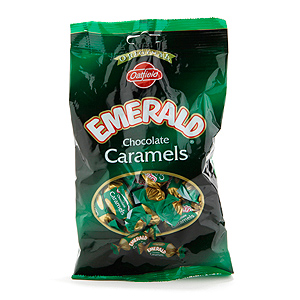 John Byrne, of this parish, has written eloquently of Oatfield’s but I think he does the Emerald an injustice. This coconut caramel with a casing of dark chocolate so thin it might have been painted on, was a toffee of the perfect chewability for my young jaws. It was not fudgey enough to deprive you of your money’s worth nor was it too resilient so as to wedge your teeth together in a masticatory morass. It even had classic packaging (which has now, alas, given way to generic computer-generated design): a portrait of an old biddy encased in a sepia oval, who, uniquely, looked very like the person likely to be holding the bag out to you, urging you to “take two, they’re small.” I have met Eastern Europeans who grew up under communism, who speak fondly of the low-rent sweets of their childhood, which were later bought up by Danone or Nestlé and cast aside as embarrassing relics of the planned economy. Thankfully the Emerald has met no such fate and is still with us — it’s a sweet that symbolised a brave new nation, a sweet that held its own. There was even Arabic writing on the packet, for God’s sake — it was that well regarded! 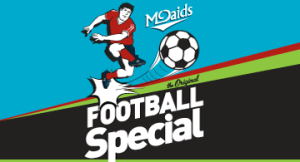 Another post-lunch staple of those summer holidays was McDaid’s Football Special, made in Ramelton in east Donegal. No doubt the fortuitous result, like Worcestershire Sauce or penicillin, of some crazy stab in the dark at something else entirely, Football Special tasted like no other soft drink. It made Irn Bru seem as recherché as buttermilk; it turned your mouth pink without tasting like gentian violet. It also had football in its name, which made it the best drink ever. I imagined it was the stuff that victorious football teams drank from the cup but later when I started appearing on such teams myself I was shocked to learn there was no McDaid’s Football Special outside Donegal. We had to make do with red lemonade, which was tantamount to imposing Babycham on Formula 1 champions. Last year, Football Special was launched on the unsuspecting masses south of Bundoran as a sort of Irish Pabst Blue Ribbon in the hope of becoming a hipster favourite. Well, I was drinking it long before any of the rest of them.

Over in Gweedore, they made crisps. This was Sam Spudz, a country cousin to Tayto and King but which nonetheless had a grittier, urban image, with its logo pilfered off Dick Tracy, a ‘z’ where a more pedestrian brand would have an ‘s’, and its avowed specialisation in “thicker crinkled crisps”, which was heralded in gumshoe-steeped radio ads. Sam Spudz probably didn’t invent the crinkled crisp but it was certainly the first to market it in Ireland, long before Hunky Dory’s (whose owner Largo Foods later swallowed up both it and Tayto) or McCoy’s. It also did a line in corn snacks that looked and tasted irredeemably cheap, and, if memory serves me right, outdid the thicker crinkled crisp in popularity in the lower 25. There may have been several but the only ones I can recall are Onion Rings and Burger Bites, each of which bore the same resemblance to their models as Blackpool Tower does to Gustave Eiffel’s effort. In all, the collective output of Oatfield’s, McDaid’s and Sam Spudz means Donegal was probably responsible for me cultivating a fearsome paunch long before I had figured out how to get served in pubs.

I’m still not sure why local industry thrived in Donegal throughout a century that was mostly dismal in Ireland from an economic point of view. You could say it was a pop-culture realisation of de Valera’s dreams of Irish self-sufficiency. Other parts of the country had their star local brands but few had as high a concentration as Donegal. Even in adulthood I kept discovering them. When I moved to Paris ten years ago, I worked in a bar, whose cranberry juice, in those days before Ocean Spray became available in France, was made by Mulrine’s in Ballybofey – “the juice production experts”, as their website says. One of the owners of the bar was from Gweedore, of course…